Why Do Graduates of Some Colleges Earn More Than Others?

Awhile back, Payscale.com published a report that included salary data for more than 300 colleges. I developed a model to examine the variation in starting salary among colleges, controlling for a set of institutional variables, including school type and size, geographic location, demographics, financial need of students, admission and graduation rates, endowment size (adjusted for enrollment), net tuition and fees, and athletic team success.

The institutional characteristics that are statistically significant and associated with higher average starting salaries include:

Having attended a medium or large college (in terms of enrollment), as opposed to a small one, with the premium being highest for graduates of large schools.

Having a large endowment, adjusted for enrollment

Having a higher net price to attend

Having a successful athletics program, as measured by director’s cup score

The institutional characteristics that are statistically significant and associated with lower average starting salaries include:

Being a public school

Having a large percentage of females enrolled

Being less selective, measured by the percent of applicants admitted

It should be noted that the results of this statistical model are correlation, and should not be considered as causative. 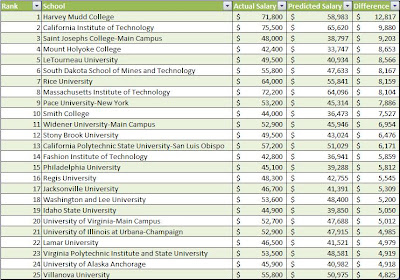 Posted by Center for College Affordability and Productivity at 8:00 AM

These results don't seem that surprising to me.

Science & Engineering are some of the best paying undergrad degrees. These programs are stronger at larger school because they require more resources. Cal Tech and Harvey Mudd, the top exceptions, great engineering schools that are abnormally small. These fields are heavily male and Asian (I am surprised by the that there is African American effect).

Cost of living is much lower in the midwest and south.

Endowment is proof that that the alumni earn a good living.