Accompanying this blog on the CCAP web site are the 600 Forbes/CCAP Best Colleges in America rankings (the top 100 are included here). In our view, the best postsecondary institution for undergraduate learning in America is the U.S. Military Academy at West Point. Students there love their classes, fare well in competition for nationally competitive awards like Rhodes Scholarships, incur no debt while in school, and do very well occupationally after graduation –both in and out of the military. The other major service academies –Air Force and Naval –do nearly as well. By contrast, Harvard falls to fifth this year, rare for it with national rankings.

Our list of top schools, however, does include many prestigious private institutions usually cited as being excellent –Princeton, Harvard, Yale, Stanford and Cal Tech all are in our top 10, as are such highly regarded liberal arts colleges as Williams, Amherst and Wellesley. Yet the Forbes list does vary in meaningful ways from those of other organizations, notably US News & World Report. For example, Duke, Cornell, Dartmouth, Penn (U. of Pennsylvania), and Johns Hopkins all made the top 15 national universities in the US News rankings last year. None of them ranks in our top 80 schools. A big part of the reason is we mix baccalaureate schools with research universities on our list, thinking students often apply to and want to compare both types of schools. However, the liberal arts colleges dominate the top schools. Using the US News categories, Penn, Dartmouth and Duke all make the top 30 national university list, although all are still ranked a good deal lower than with US News. However, we are much higher on the major military academies and some liberal arts colleges (e.g., Centre and Kenyon) than US News. All of those schools rank in the top 30 on our all institution list. West Point ranks number one overall, but only 14th on the liberal arts college list last year for US News, and Kenyon ranks 22th overall, but only 32nd on the US News liberal arts college list that excludes universities.

Our top schools are dominated by liberal arts colleges and private schools. 46 of the top 50 schools are private –and only one out of 50 is a traditional state university (College of William and Mary), and the bachelor’s degree institutions heavily outnumber the universities (31 vs. 19). Even looking at the top 100 schools, only five are traditional public universities (in addition to William and Mary, the Universities of Virginia and North Carolina, and the Berkeley and Los Angeles campuses of the University of California).

We got into the rankings business because we thought a good ranking system should be consumer based –providing future college students information important to them. We emphasize outcomes, not inputs or reputation. We don’t care how university presidents rank schools, or what the average faculty salary is, or the typical student SAT score. What do we care about? Do students like their courses? (25 percent in our weighting.) Do they achieve post-graduate vocational success? (another 25 percent.) Do they graduate in four years (16 and 2/3 percent) –and without a lot of debt? (another 20 percent.) Do they and the faculty do well in competition for nationally competitive academic awards? (13 1/3 percent.)

We measure student course assessment based on evaluations from the RateMyProfessors.com web site, vocational success by entries in Who’s Who in America and post-graduation salaries as reported by PayScale.com, graduation rates and predicted graduation rates based on data reported by schools to the federal government as well as internal calculations based on a statistical model, debt loads also on data reported to the federal government, and national competitive awards (e.g. Rhodes Scholarships, Nobel Prizes) as calculated by the CCAP staff. A much more comprehensive description of methodology is available on both the Forbes and CCAP web sites.

A few other observations:

• Colleges just granting bachelor’s degrees on average have higher level of student course satisfaction and better four year graduation rates than research universities;
• The Northeast is disproportionately represented amongst the top schools –28 of the top 50 are in the nine New England or Mid-Atlantic states;
• A high ranked school is not always the optimal choice for many students –cost, student academic performance, the area of academic interest, distance from home, size of school and other factors are often highly relevant to the college selection decision, and these factors are not incorporated in rankings;
• Spending more money per student has only minor effects on our rankings (unlike some other rankings); engaging in an “academic arms race” to spend more per student will not work well for schools wishing to improve their Forbes/CCAP rankings;
• The Forbes/CCAP rankings are hard for schools to “game” or use deceptive tactics to improve one’s standings –none of the data are provided directly to us by the schools themselves.

We urge readers to also look at our list of Best Values in higher education. A school that is ranked 50th on the Best College list might cost twice as much as one ranked 60th, so the discerning consumer may prefer the lower cost alternative. There are also 23 schools that make both the top 100 Best College list and the 100 Best Value list. Also, we remind readers that we rank only 600 of the thousands of American schools. A school ranking 500 on our list may in fact be fairly good –above average – relative to many unranked schools. And there are probably some gems hidden among those unranked schools (we suspect the College of the Ozarks might be one). Importantly, we also fail to rank for profit institutions such as the University of Phoenix or Strayer University.

A rather unique feature, available on Forbes.com, this year is a “do-it-yourself” ranking. This tool provides individual readers to rank schools, using the very same data we use, according to their individual preferences and desires. 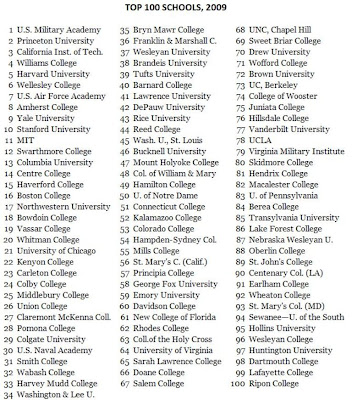 Posted by Center for College Affordability and Productivity at 6:00 PM

Nice Blog. Thank you for sharing. Recently I found College Information which offers both Associate of Occupational Studies and Associate in Applied Science degree programs. The programs of study are listed below, Business, Health Disciplines, Criminal Justice and Computer Technology. You can also Visit.

I found Insurance Agency which provides exceptional service with Personal and Business Insurance throughout North and Central New Jersey. You can also visit.