I did a radio show with Steve Scher this afternoon on student loans. (I started off a bit rocky, but eventually recovered). While preparing for it, I accidentally came up with an estimate of the yearly shadow debt of college. My back of the envelope calculations indicate that in total (standard debt plus shadow debt), Americans borrow about 126 billion dollars a year for college. 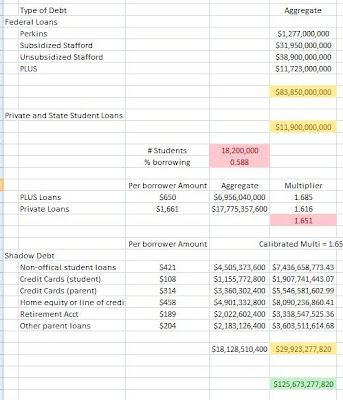 The Federal Loan and Private and State Loan numbers come straight from the College Board (table 1).

The interesting part is the shadow debt calculations. Sallie Mae’s How America Pays for College includes a table indicating the amount borrowed from various sources (table 2a). Unfortunately, this is an average per borrower. So to get an aggregate figure, I needed to multiply by the number of borrowers. To find that, I took the total number of students from the Digest of Education Statistics (table 187) and multiplied by the % of students borrowing according to finaid.org (first table at the link). These are the first 2 red numbers.

Since there was some overlap between Sallie Mae and the College Board figures, I was able to find PLUS and Private Loan amounts under both methods. It turns out that Sallie Mae’s figures are off by a factor of about 1.6 for those 2 categories. Assuming that they are off by a similar amount in the other categories, multiplying the Sallie Mae aggregate figure by 1.6 (the third red number) gives us calibrated figures that are comparable to the College Board figures. Adding it all up gives us 126b.

For those interested in playing around with the numbers, send me an email at gillenandrew at gmail and I’ll send you the excel file.
Posted by ~ at 6:00 PM

As tuition increases and borrowing increases, I am of the opinion that a massive de-leveraging is inevitable. And I think the stuctural changes being made to our economic system will only hasten the (next) taxpayer bailout of higher ed. The fact that student loans are immune to bankruptcy doesn't help. And then the best idea of all (oozing sarcasm) is the capitalization of interst. My generation is really screwing our children. I think I'll have "two fingers" now - I'm all worked up.

Sallie Mae/Nellie Mae has historically exaggerated the use of credit card borrowing for college as part of a long-term campaign to increase federal student loan borrowing limits, which, in some cases, remained the same for decades at a time. It is simply not reliable. Despite the fact that Sallie can no longer issue new federal student loans after 7/1/10, it is too late to come clean, because this would render the previous "data" as questionable. Other studies, such as in California, have found negligible (and declining) use of credit cards to cover college costs.

The federal education loan system is self-financing and could go on indefinitely. Anyone who says there is a "day of reckoning" or a "massive de-leveraging" down the road simply doesn't understand the system. Immunity to bankruptcy has no effect and allowing dischargeability would only impact colleges if colleges were making the loans. This is a third-party funding situation. Are doctors less likely to accept a patient because medical debts are dischargeable in bankruptcy? Nope. There is third-party insurance, and, even if the patient is uninsured, there is the uninsured pool, emergency room backstop, etc.